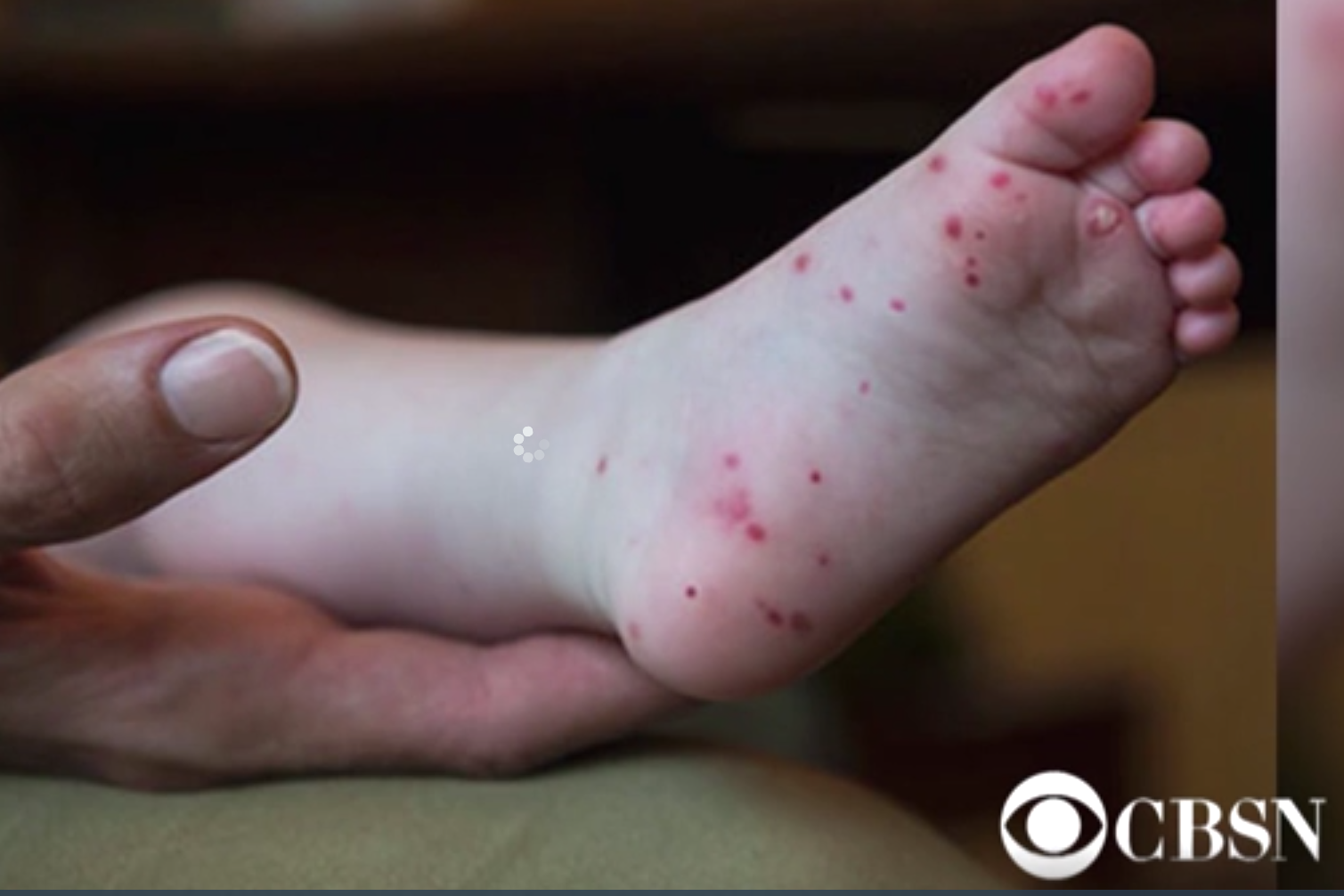 What you need to know right now.

A contagious childhood illness with a memorable name appears to be spreading across several states. Doctors are reportedly seeing more and more cases of hand, foot, and mouth disease — and children aren’t the only ones being affected.

According to multiple reports, doctors are seeing outbreaks in Indiana, South Carolina, Tennessee, and Virginia. And two Major League Baseball players in New York City have also been diagnosed with the disease.

“This year we’re getting a lot of hand, foot and mouth disease (cases),” Dr. Keith Tolar of Deaconess Pediatric Urgent Care in Evansville, Indiana, told the Courier-Press. “We’ve been seeing it all summer and a little bit of an uptick in the last week or two.”

Hand, foot, and mouth disease, which is caused by a virus, gets its name from the small red sores or rashes that often appear in the mouth and on the palms of the hands and soles of the feet. It’s a common illness among children under the age of 5, but older children and adults can catch it as well.

Dr. Elizabeth Mack, an associate professor of pediatric critical care at the Medical University of South Carolina, says symptoms can arrive several days after a person gets infected.

“It’s characterized by… so often a fever, then followed by sore throat, then often a runny nose and then comes the rash,” Mack told CBS affiliate WCSC. “The rash can be blistery… regarding the mouth, it can be on the inside of the cheeks, the tongue, the gums, and then it can be on the fingers, the palms of the hands, the soles of the feet and even on the buttocks.”

Hand, foot, and mouth, which is often linked to poor hygiene among young children, can be spread through kissing, hugging, or sharing food and drinks. The disease can also be transmitted by coughs, sneezes, or contact with the germs from a baby’s diaper.

“The way that it’s managed, there’s no particular magic medicine or drug. It’s just about hydration, pain medicines, whether that’s an acetaminophen or ibuprofen, talking with your pediatrician about that, as well and a lot of TLC, washing your hands in between that TLC,” Mack explained.

The disease often spreads through day care centers and schools in a similar way to the common cold. Parents with children who have open blisters and a fever should keep them home.

Oral ingestion is the main source of coxsackievirus infection and hand-foot-and-mouth disease.

The illness spreads by person-to-person contact with an infected person’s:

The usual period from initial infection to the onset of signs and symptoms (incubation period) is three to six days. A fever is often the first sign of hand-foot-and-mouth disease, followed by a sore throat and sometimes a poor appetite and malaise.

One or two days after the fever begins, painful sores may develop in the front of the mouth or throat. A rash on the hands and feet and possibly on the buttocks can follow within one or two days.

Sores that develop in the back of the mouth and throat may suggest that your child is infected with a related viral illness called herpangina. Other distinguishing features of herpangina include a sudden high fever and in some instances, seizure. Sores that develop on the hands, feet or other parts of the body are very rare.

When to see a doctor

Hand-foot-and-mouth disease is most common in children in child care settings because of frequent diaper changes and potty training, and because little children often put their hands in their mouths.

Although your child is most contagious with hand-foot-and-mouth disease during the first week of the illness, the virus can remain in his or her body for weeks after the signs and symptoms are gone. That means your child still can infect others.

Some people, particularly adults, can pass the virus without showing any signs or symptoms of the disease.

Outbreaks of the disease are more common in summer and autumn in the United States and other temperate climates. In tropical climates, outbreaks occur year-round.

Children usually develop immunity to hand-foot-and-mouth disease as they get older by building antibodies after exposure to the virus that causes the disease. However, it’s possible for adolescents and adults to get the disease.

The most common complication of hand-foot-and-mouth disease is dehydration. The illness can cause sores in the mouth and throat, making swallowing painful and difficult.

Watch closely to make sure your child frequently sips fluid during the course of the illness. If dehydration is severe, intravenous (IV) fluids may be necessary.

Hand-foot-and-mouth disease is usually a minor illness causing only a few days of fever and relatively mild signs and symptoms. A rare and sometimes serious form of the coxsackievirus can involve the brain and cause other complications:

Viral meningitis. This is a rare infection and inflammation of the membranes (meninges) and cerebrospinal fluid surrounding the brain and spinal cord.

Certain precautions can help to reduce the risk of infection with hand-foot-and-mouth disease:

Wash hands carefully. Be sure to wash your hands frequently and thoroughly, especially after using the toilet or changing a diaper and before preparing food and eating. When soap and water aren’t available, use hand wipes or gels treated with germ-killing alcohol.

Disinfect common areas. Get in the habit of cleaning high-traffic areas and surfaces first with soap and water, then with a diluted solution of chlorine bleach and water. Child care centers should follow a strict schedule of cleaning and disinfecting all common areas, including shared items such as toys, as the virus can live on these objects for days. Clean your baby’s pacifiers often.

Teach good hygiene. Show your children how to practice good hygiene and how to keep themselves clean. Explain to them why it’s best not to put their fingers, hands or any other objects in their mouths. 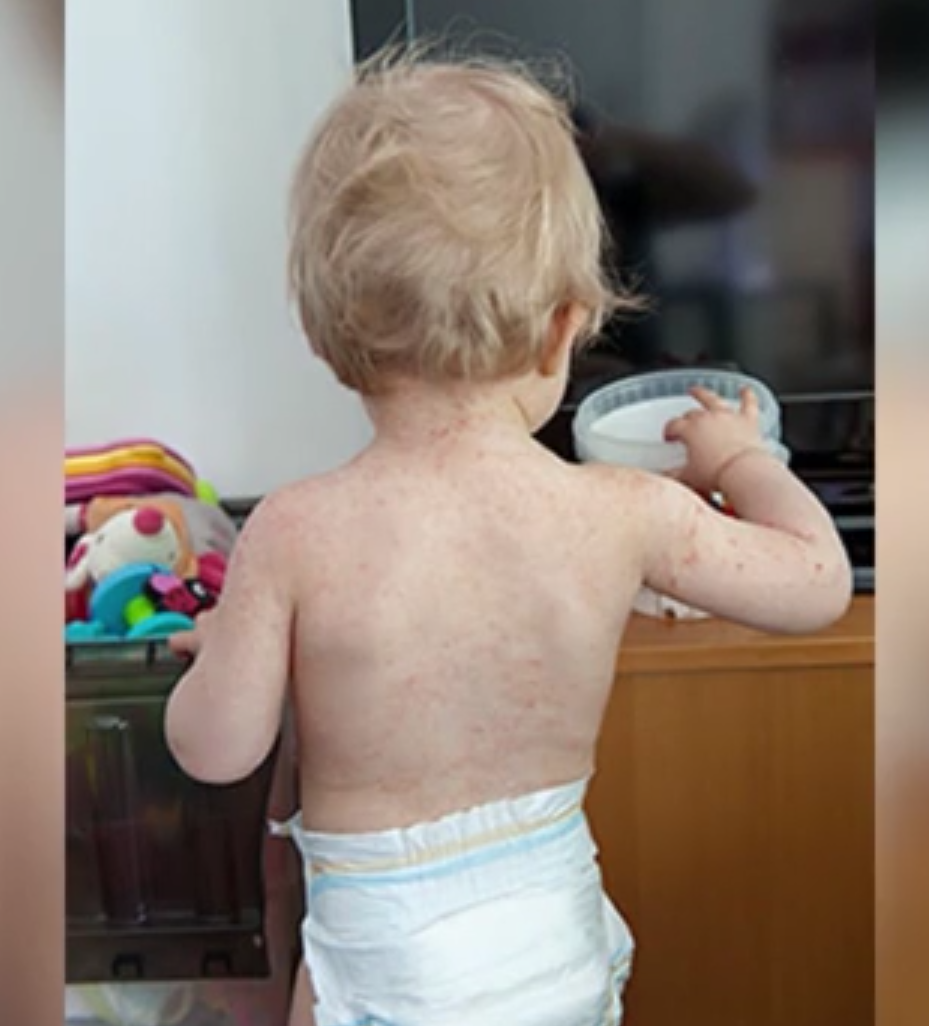